In stock
can be shipped within 2 - 8 days when cashed

23.00 €
Price incl. german VAT, plus Shipping
→ Depending on the Delivery Address the VAT may vary. It's calculated / shown at the 'check out'.
• more infos here • 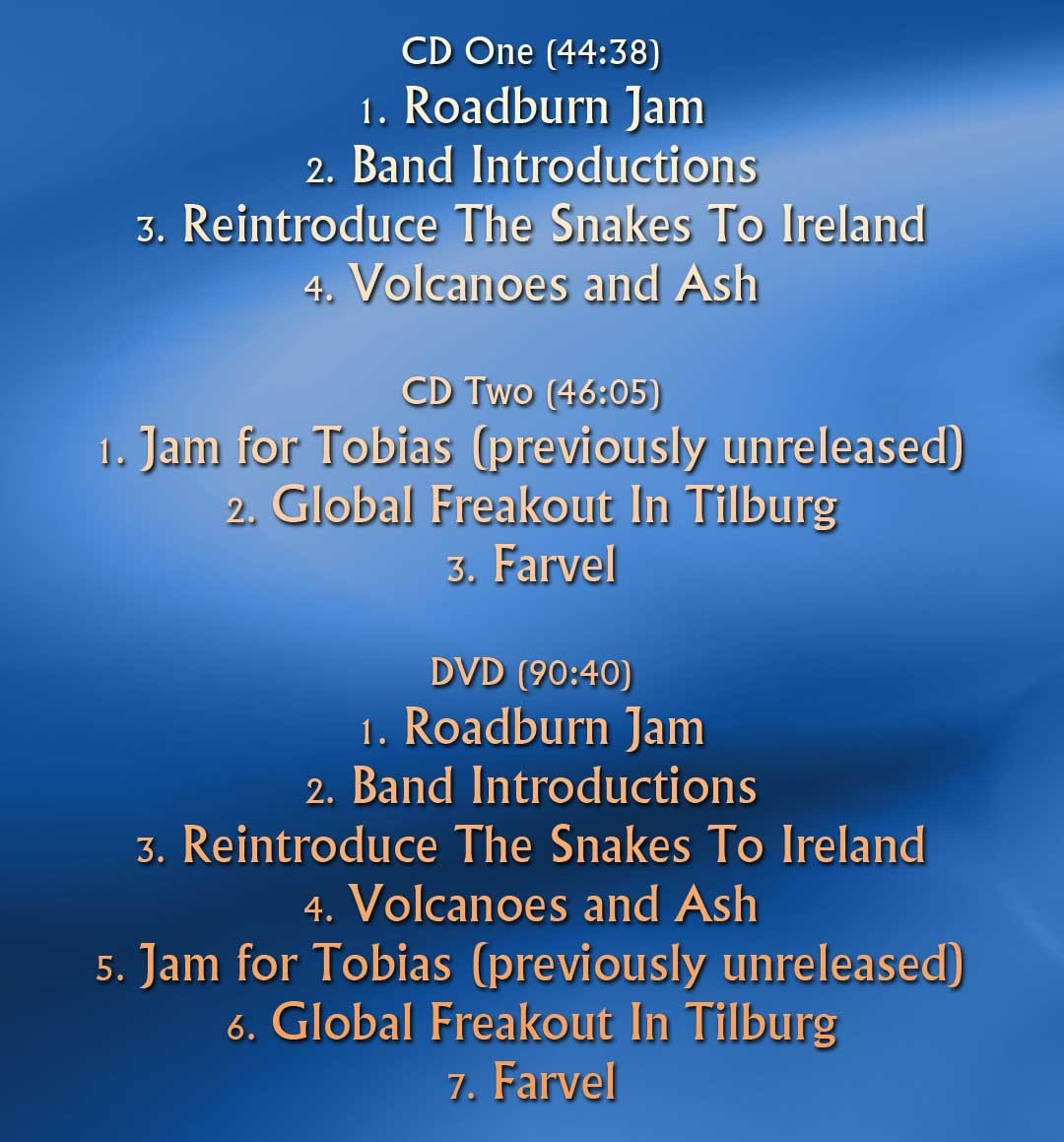 Øresund Space Collective (ØSC), formed in 2004, is a totally improvising Scandinavian space rock band and has been releasing albums since 2006.
​The band has played concerts & festivals all over Europe. Their music is quite diverse and influenced by the ever-changing line up in the collective.
In 2010, ØSC played the Bat Cave at the Roadburn Festival, Tilburg, Holland. It was a fantastic show and SRP released
this as a double vinyl LP (SRP003) that has long been sold out.
In 2021, Dr Space did a totally new mix of this concert, which includes the full show. One song, "Jam for Tobias", was not
included on the double LP. In addition, a friend of the band, Anders, had filmed the show from the back of the hall and this
has never appeared anywhere before. This has been sync´d with the new audio (Thanks Larry) and is included on a DVD!
Enjoy this archive show in a new digital mix and video.
... there are some skips in the amazing first jam on the original hard disc recording, sorry ....
Space Rock Productions

This was a review of the vinyl in 2011:
OSC's ninth album "Live At Roadburn 2010" is a vinyl-only live offering, with five tracks spread across four sides.
The Collective opened the 2010 Roadburn Festival, and had apparently packed out the venue twenty minutes into their set,
about the amount of time it took them to play their first number, suitably entitled "Roadburn Jam". As far as I am aware,
none of this music has appeared on any of their previous studio albums, the audience being treated to a series of compositions
by the six musicnauts currently making up the core band. In fact, the first sign that this is even a live recording doesn't appear
until the twelve minute mark, when one of the band members offers up some festival-introducing chat. 15 minutes in, and the
jam reaches thrilling intensity with an extended wah-wah guitar solo running through the music.
After some band introductions by Dr Space, side two begins quietly with "Reintroduce The Snakes To Ireland", which seagues into
"Volcanoes And Ash", named for the Eyjafjallajokull Icelandic volcano that exploded on 14th April 2010, the day before the festival
opened, wreaking havoc on travel plans which caused some bands to miss their festival gigs, while OSC themselves were stranded
in Holland for a couple of extra days. At twelve minutes in length, "Reintroduce the Snakes" proceeds from sparse emptiness to high
octane riffage, while "Volcanoes" is more synth-focussed for much of its length. Mercifully, and despite featuring in a festival that
focusses strongly on the many sub-genres of metal, OSC never lose their funkiness and lightness of touch, and "Global Freakout In
Tilburg" features intricate guitar picking, and an almost country feel to it, at least in the first half of its 16 minute length, whereupon
it metamophoises into a dub improvisation. At its conclusion, the band promises to play some heavy stuff, although the resultant jam
fades out after only a minute or so, at the close of the third vinyl side. Side four features a 15 minute "Farvel" with some Gong-style
glissando guitar which builds up to a frantic finale.
There are currently no plans to release this set on CD, and the time restrictions of the vinyl format means that one number,
"Jam For Tobias" (their sound mixer) was unable to be included. Should a CD release follow (as is very much hoped will be the case),
the missing track will be restored to its rightful place.
aural-innovations / Pat Albertson